This year, we are honoring Theresa Carter, president of the Synthomer Foundation, as our 2023 Canal Boat Captain. 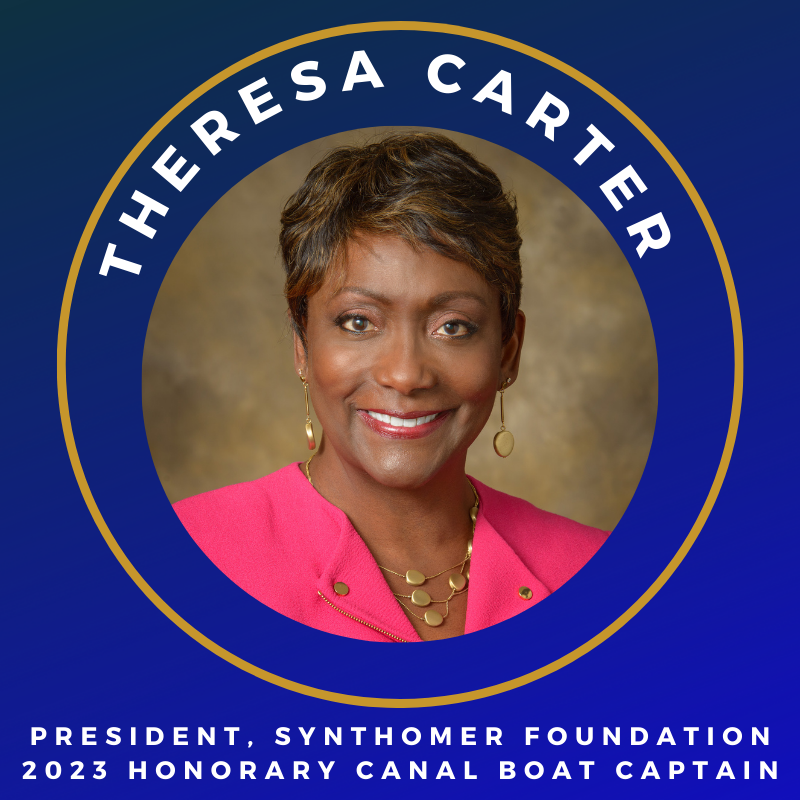 Theresa Carter is President of the Synthomer Foundation (formerly OMNOVA Solutions), a $28 million endowment supporting local communities throughout Synthomer’s footprint within the United States. Her passion for bringing communities together and creating tomorrow’s leaders is reflected in her role in the Foundation, which in 2022 provided nearly $1.4 million in support to educational initiatives, civic investments, health and human services, and the arts.

Theresa’s purpose-driven mission is to inspire volunteerism and empower others to give back to the community. She is active in her church, and serves on a number of non-profit community boards, advisory councils and committees, including the Akron Community Foundation; Greater Akron Chamber; The NAACP Akron Chapter; Cleveland Clinic Akron General Medical Center; Cleveland State University Foundation board; Summit Metro Parks Commissioner, and is an emeritus board member with the Akron Urban League.

She has been honored with many awards and recognitions for her service and commitment to the community, including Arts Now Distinguished Patron Award; Goodwill Industries honoree; Akron Urban League’s Whitney M. Young Jr., Community Service Award; the H Peter Burg Leadership Awards through the Greater Akron Chamber, American Red Cross and Akron Public Schools; Leadership Akron’s Lieberth Award, and the Executive of the Year Award through the Akron/Canton Affiliate of NSME.  Theresa was also a recipient of OMNOVA Solutions Chairman’s Award (the Company’s highest honor).

A native of Demopolis, Alabama, Theresa graduated with a Bachelors of Arts in Communications from the University of Alabama.  She’s the proud mom of two daughters, Erin and Cesily and is Lovie to her grandson Devon, who is the absolute joy of her life.

If you are interested in becoming sponsors of the 2023 Canal Boat Captain's Ball or donating to our virtual auction, please view the forms below.